Camping and bicycling go hand in hand, and some of our favorite times in the RV lifestyle have been when we stayed in beautiful places near scenic trails that we explored at leisure on two wheels. Riding a bike is slow enough to let us stop and smell the flowers but fast enough to cover some real ground and see a lot of things.

There are many different kinds of cycling, from mountain biking and road riding to leisurely cruising. Pedaling around the RV park on a bike is a great way to get some fresh air, and many public campgrounds are situated on or near bike trails.

The gradual transformation of thousands of miles of former rail lines to gravel or paved paths has been a boon to cyclists. These rails-to-trails routes usually go through pretty scenery and are often marked with plaques explaining local history and how the railway was used back in the day. In some places, train depots still stand sentry at various points along the trails.

In our travels, we have ridden many delightful rails-to-trails routes. Some are as long as 100 miles, and we have tackled them in sections, doing out-and-back rides from each camping spot. Idaho’s Trail of the Coeur d’Alenes, South Dakota’s Mickelson Trail in the Black Hills, Minnesota’s Paul Bunyan and Heartland State Trails, and the New River Trail in Virginia all offer long-distance rides that roll through interesting countryside from one small town to the next.

Some communities have bike paths that connect to nearby rails-to-trails routes. Sun Valley, Idaho, and the neighboring towns have so many paved paths that we have yet to ride them all, despite visiting several times. 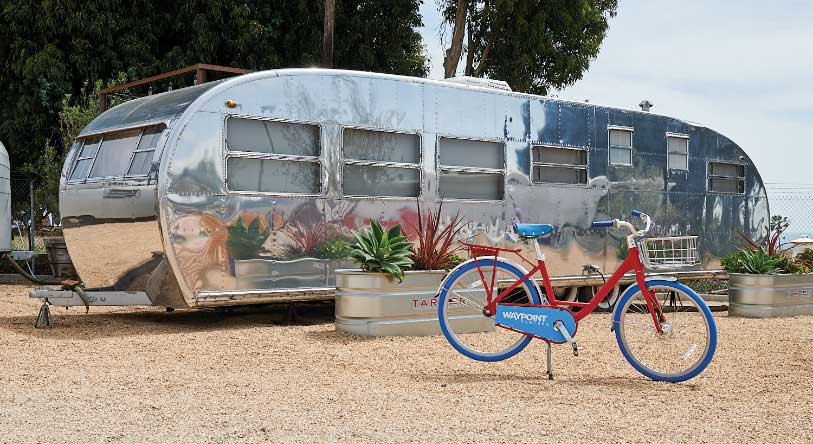 Some RV parks and resorts furnish bicycles for rental or even complimentary use. Waypoint Ventura, a Southern California RV park with vintage-trailer lodgings, allows guests to borrow its beach-cruiser bikes free of charge. Photo: Waypoint, Ventura

A few national parks offer paved paths that weave between the sights, and the National Park Service has been lengthening many of these. The bike path at Utah’s Bryce Canyon is a thrilling ride from Red Canyon at one end to Inspiration Point at the other, with wonderful twists and turns through the ponderosa pine forest in between. In Wyoming the paved path through Grand Teton National Park wanders along the base of stunning mountain peaks, and a ride at dawn may yield a moose sighting.

Florida’s Gulf Islands National Seashore near Pensacola Beach has a paved path that’s lined on both sides with sugar-white sand. Crashing emerald waves fill the views on one side of the trail, while the mirrorlike Intracoastal Waterway calmly laps the other. In Alberta, the bike path at Waterton Lakes National Park offers awe-inspiring views as you drop down into the heart of the park at the lake.

All of these trails are ideal for cyclists of any age or ability. Toddlers can be towed in a bike trailer behind mom or dad’s bike, and seniors can take a spin of just a few miles on a cruiser bike and not worry about uneven ground or steep climbs or descents. Electric bikes make the rides even easier. 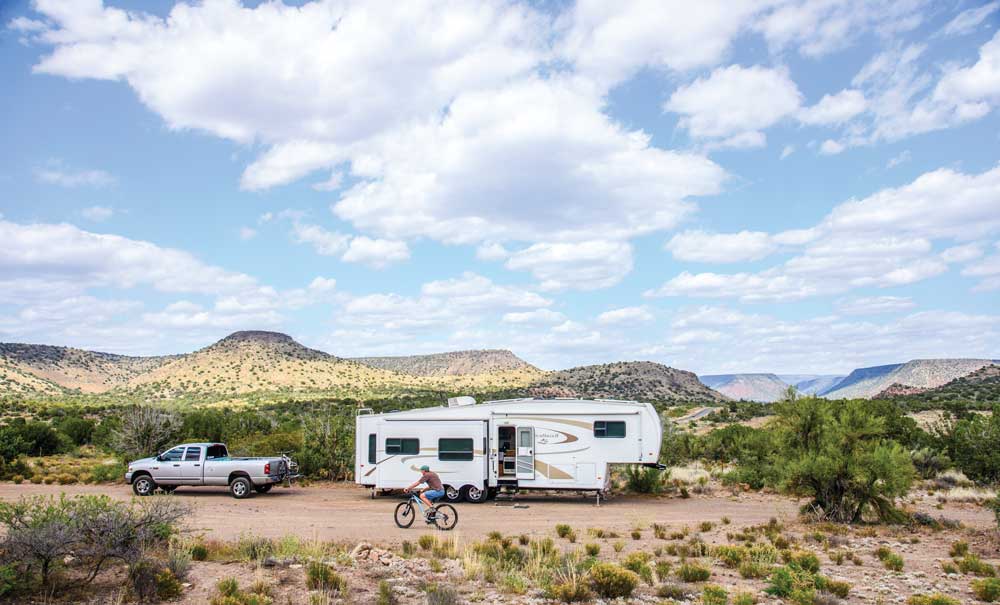 No matter where they park their fifth-wheel, author Emily Fagan and her husband, Mark, love to get out on their bikes and go exploring. Pedaling down forest roads brings them closer to nature, while joining local bike clubs’ weekend rides makes it easy to enjoy road riding without knowing the area. Photo: Emily Fagan

For more athletic and ambitious cyclists, thousands of miles of challenging mountain-biking routes ribbon the country. Trails in Sedona, Arizona, and Moab, Utah, wind through gorgeous red-rock vistas that are as spectacular as the trails are treacherous. For a softer landing, the woods around Bend, Oregon, are a great place to practice and improve mountain-biking skills.

We have found that the most versatile bicycles for our full-time RVing lifestyle are mountain bikes, even though we prefer road riding. Most often we set up camp near dirt roads, so even if we aren’t “shredding the gnar” on single-track trails, we appreciate our full-suspension mountain bikes as we bump along on rutted two-track forest roads. No matter the terrain or where we’re going, our mountain bikes can handle it.

Road riding is a special challenge because many streets are clogged with traffic and don’t have sufficiently wide bike lanes or shoulders to make bicycling safe. Road riders can look for suitable routes online, but one of the best ways to discover good cycling roads is to search for a local bike club and join a group ride. Many bike clubs welcome visitors, and weekend mornings are when they usually ride together.

As soon as you are pedaling in the paceline, you’ll feel right at home without needing to know the roads, and when you stop for the traditional coffee afterward, you can get everyone’s best tips and advice for other things to see and do in the area. From Southern California’s San Diego Bike Club to the North Florida Bike Club in Jacksonville, we have loved riding with local biking groups in places where we’ve gone RVing.

Bicycle rentals and even loaners are available at some RV campgrounds and bike shops, and a number of communities now have bike-share programs. For RVers traveling with their bikes, a secure way to transport them is needed. 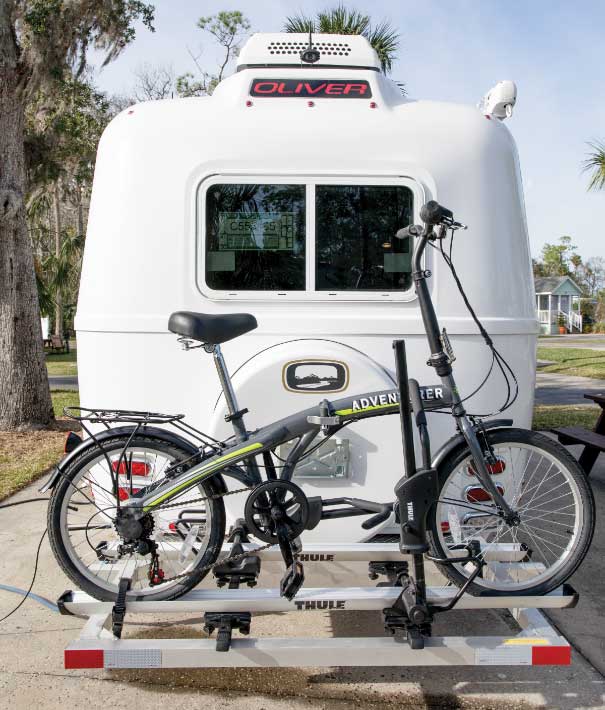 Keeping up with demand, RV manufacturers have been offering more choices for transporting bicycles. Oliver fabricates a custom aluminum bike rack (shown) for its fiberglass travel trailers, and also has an add-on 1¼-inch rear-bumper receiver that can support a hitch-mounted rack. 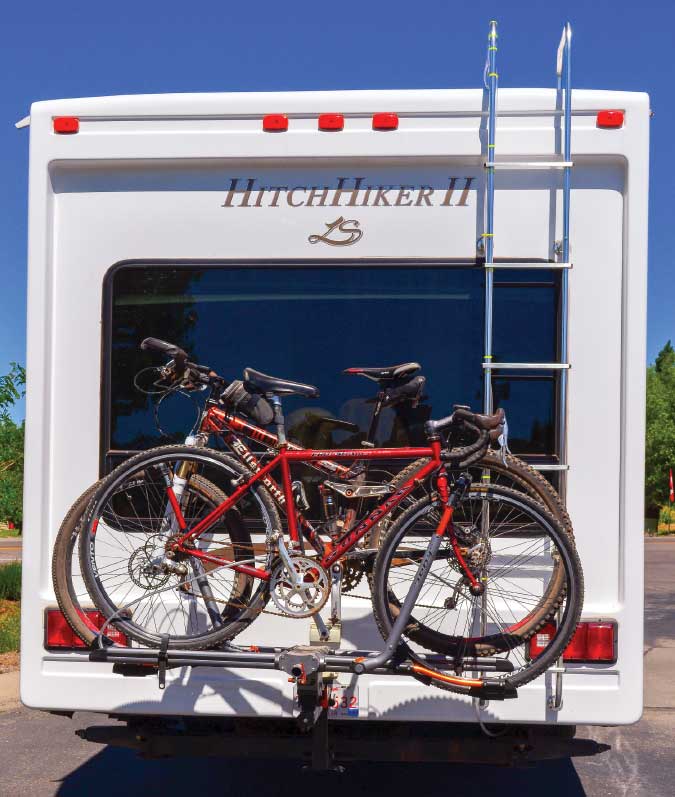 Hitch-mounted tray-style racks provide a stable platform for bikes and are easy to set up and load. 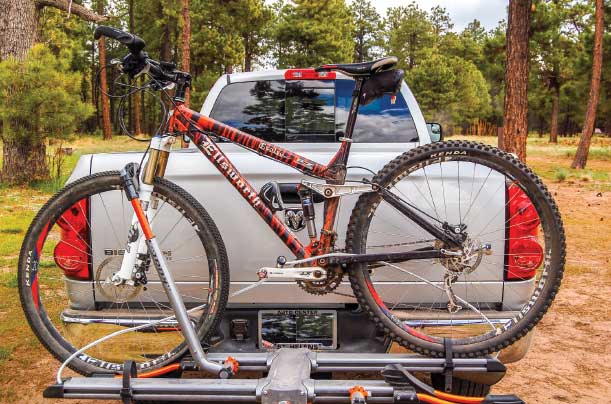 Hitch-mounted racks have the added benefit of being able to move from the trailer to the tow vehicle, if both have receiver hitches. 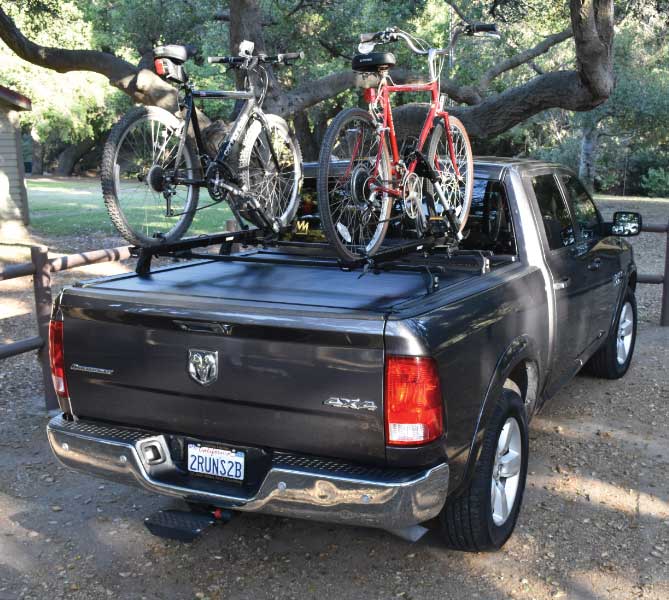 Pace Edwards’ UltraGroove retractable truck-bed cover accommodates the crossbars of most Thule and Yakima racks, allowing bikes to be transported above the truck bed. 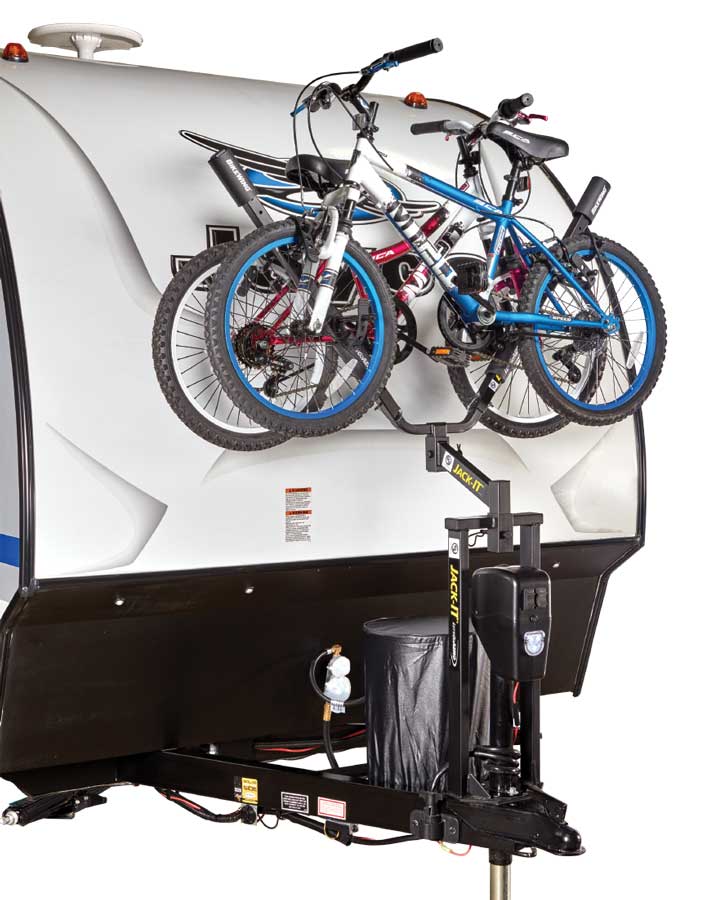 The Jayco Hummingbird is among the new RVs with a bike rack on its options list, ensuring that the rack won’t void the manufacturer’s warranty. Mounted over the trailer’s tongue jack, the Jack-It carrier provides a perch for two bikes and allows the driver to see them in the rearview mirror.

Bike racks vary tremendously in style and quality, and some methods for carrying bikes are preferable to others. When we started RVing, we mounted a specially designed bike rack on the roof of our pop-up tent trailer. When we moved up to a 27-foot travel trailer and started full-timing, we traveled for a year with our cyclocross bikes in the truck bed under a cap. The cap provided excellent weather protection for the bikes as well as a roomy place to carry them.

One downside of carrying bikes on the back of the trailer is that they extend the overall length of the rig a few feet, making the back end of the trailer swing a little wider during tight turns. Also, the bikes are exposed to the elements and road debris flung up by the trailer’s wheels. A bike cover or well-tied tarp can protect bikes from road grime and rain. A seamstress who specializes in canvas work made a custom bike cover for us out of UV-resistant and water-repellent Sunbrella fabric.

One benefit of fifth-wheel trailers is that bikes can be “garaged” under the fifth-wheel overhang while in camp. This not only protects them from bad weather, but they can be locked to one of the landing legs with a conventional bike lock. Granted, a clever thief could brace the trailer and raise the landing jacks to steal the bikes, but we haven’t heard of that happening.

Many lightweight trailers aren’t built to support the added weight of a rack and bikes, and mounting a bike rack may void the RV’s warranty. Before investing in a rack, make sure it is approved by the manufacturer of your RV. In addition, some bike-rack companies don’t warranty the use of their racks on the back of RVs.

Unsuitable or poor-quality racks can cause damage to bikes. When we moved into a fifth-wheel, our cyclocross bikes were damaged because the rack held them in position with clamps around the top tubes. Tray-style racks are a better design because they cradle both wheels and use a telescoping arm to secure the front wheel or frame. Some clever racks transform into bike stands for repairs and maintenance.

Toy-hauler RVs offer an ideal setup because bicycles can be strapped down inside the trailer’s garage. This keeps them out of the elements and out of sight of thieves, and protects them from rear-end traffic accidents.

Occasionally, you may want to travel in your tow vehicle with the bikes but not the trailer, especially if the bike trail starts more than a few miles from the campground. At those times, a hitch-mounted bike rack can be moved from the trailer to the hitch receiver on the tow vehicle. Racks can also be mounted on the roof of the tow vehicle, in the bed of the truck or on top of a truck-bed cover with side rails that fit bike-rack hardware.

Bikes can even be hung over the truck’s tailgate with the front wheel outside the bed and the rest of the bike inside the bed. Specially designed pads secured with straps can protect the truck from scratches. A furniture pad also works in a pinch for short distances.

Better racks have built-in locks so bikes can’t be stolen. For racks that don’t have a lock, a conventional bike lock can do the trick if you can find a place to secure it to the tow-vehicle frame. Likewise, if you plan to ride your bike to a coffee shop or run errands with it, a small bike lock or U-lock will stop most thieves.

For many of us, bicycling is a natural extension of the RV life, and no matter what you ride, where you go or how you get your bike there, there’s nothing like that feeling after a glorious hour in the saddle when you relax with a cool drink or cup of coffee and say, “Wow, what a ride!” 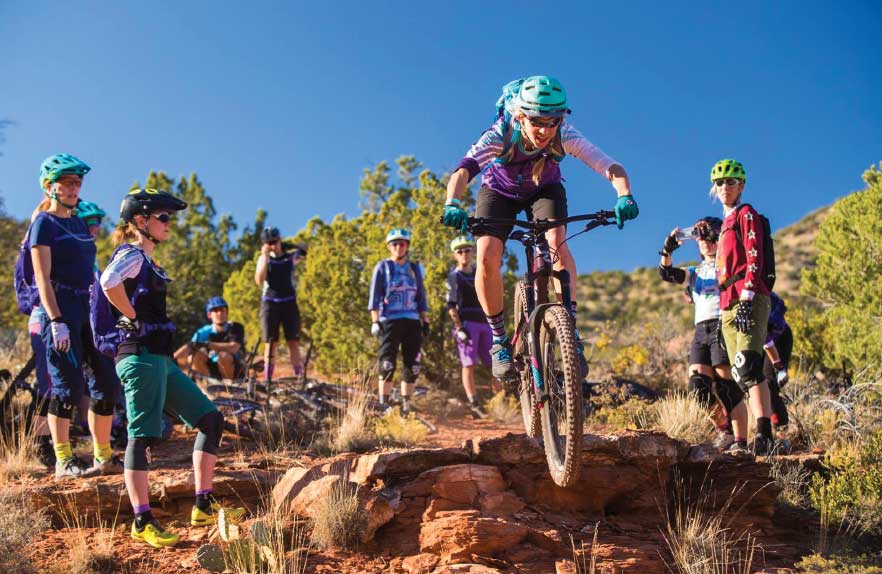 Mountain biking intimidated me until I attended one of Lindsey Richter’s Ladies AllRide camps. Despite being a group of 28 women from 19 to 58 whose skill level ranged from “I haven’t ridden a bike since I was 10” to one young woman who was training for the pro circuit, the workshop got everyone spinning their wheels. I was astonished to find myself jumping my bike off boxes into soft grass on the first day.

The camps take place around the country and teach mountain-biking skills in an encouraging environment. Check the website for the 2019 schedule. — Emily Fagan 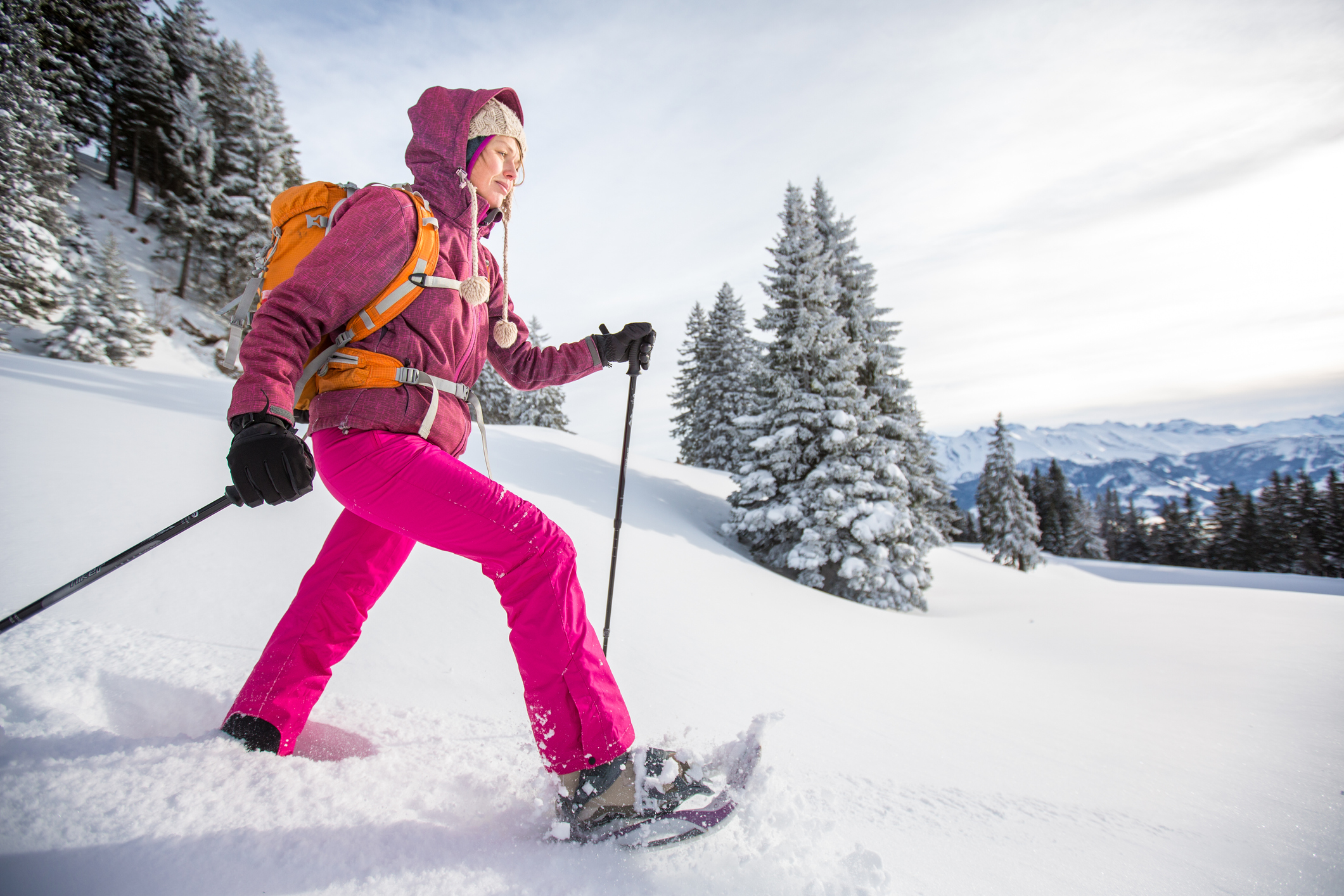 Feel the Burn Snowshoeing: How Many Calories Can You Burn? 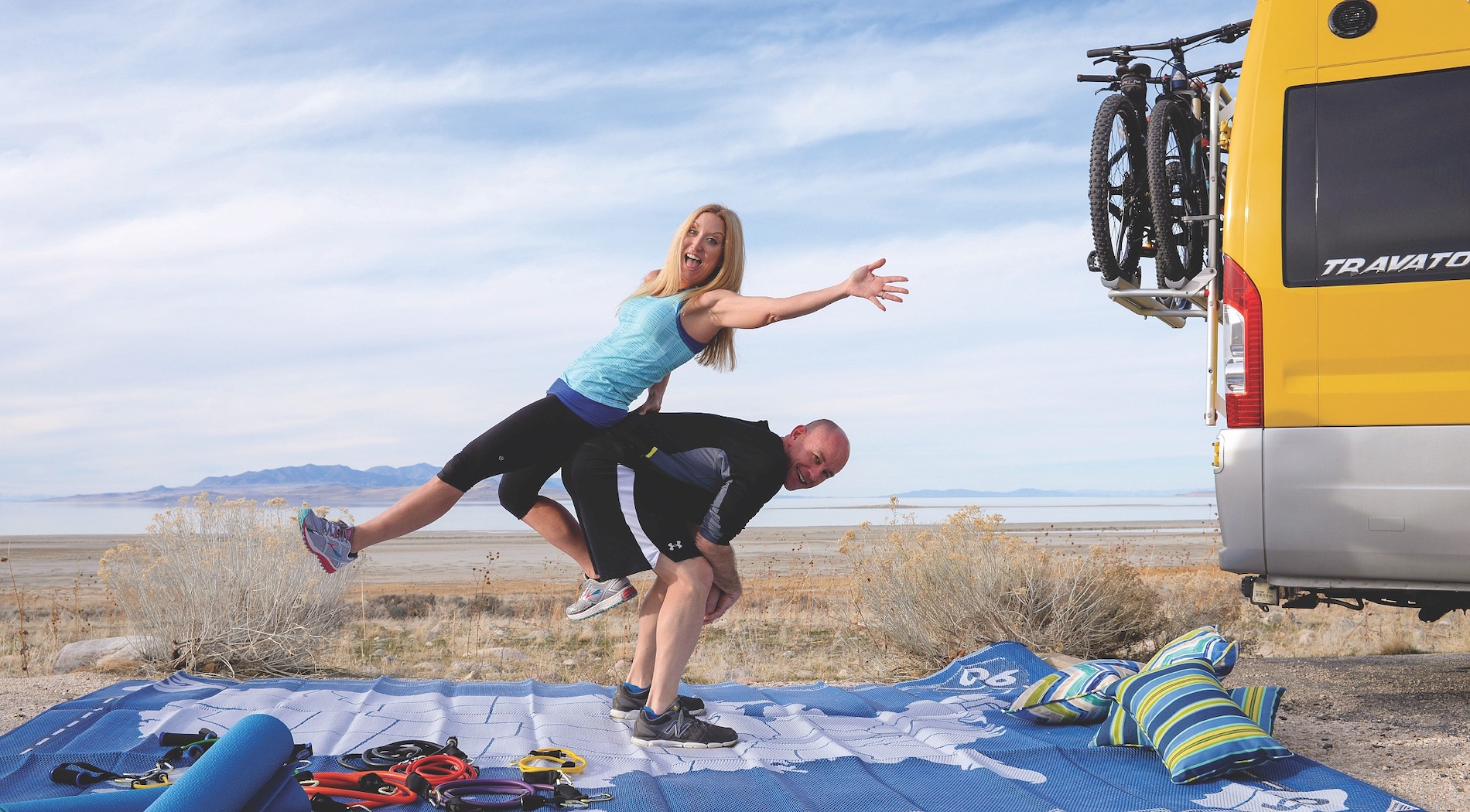 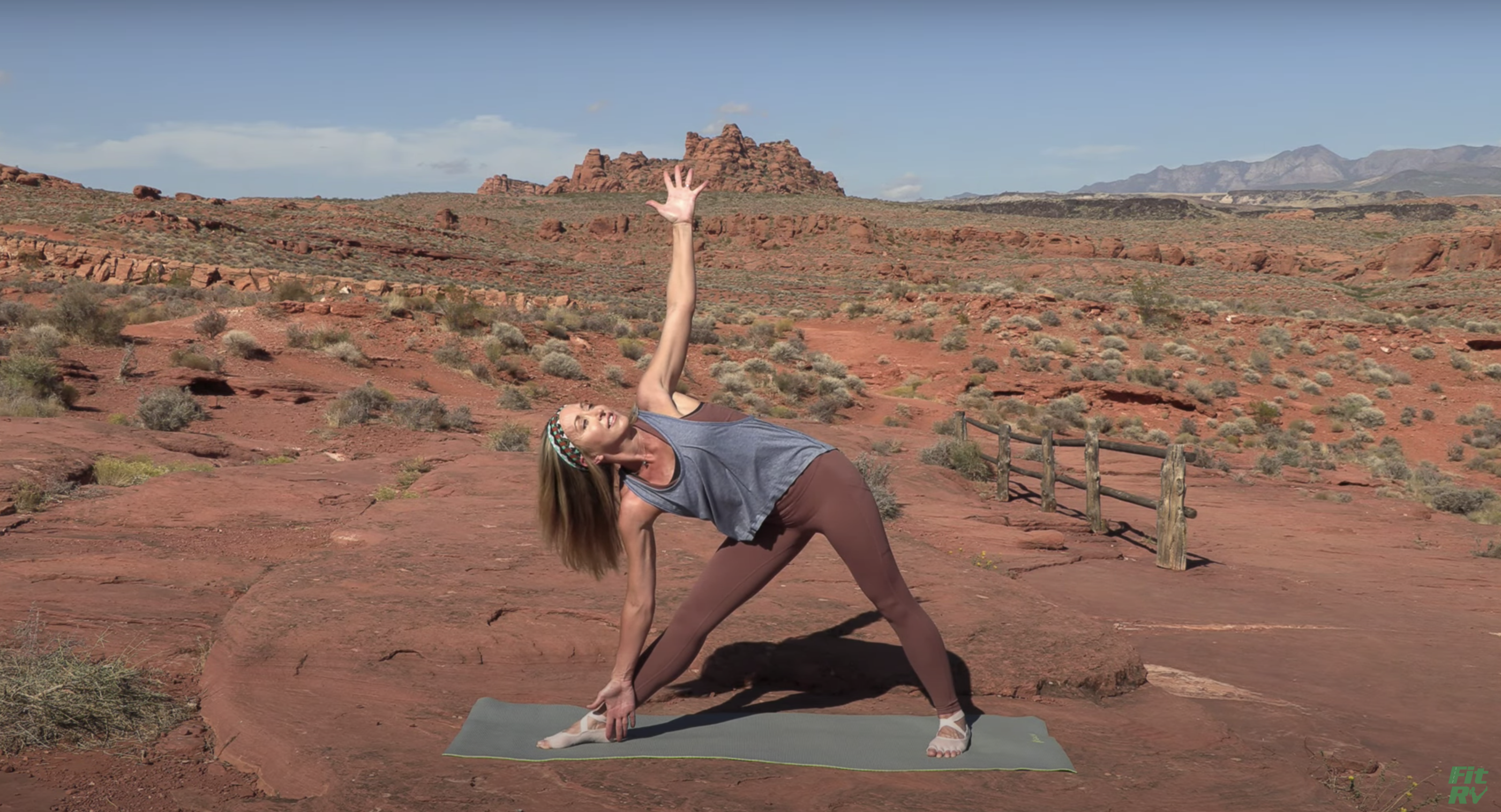 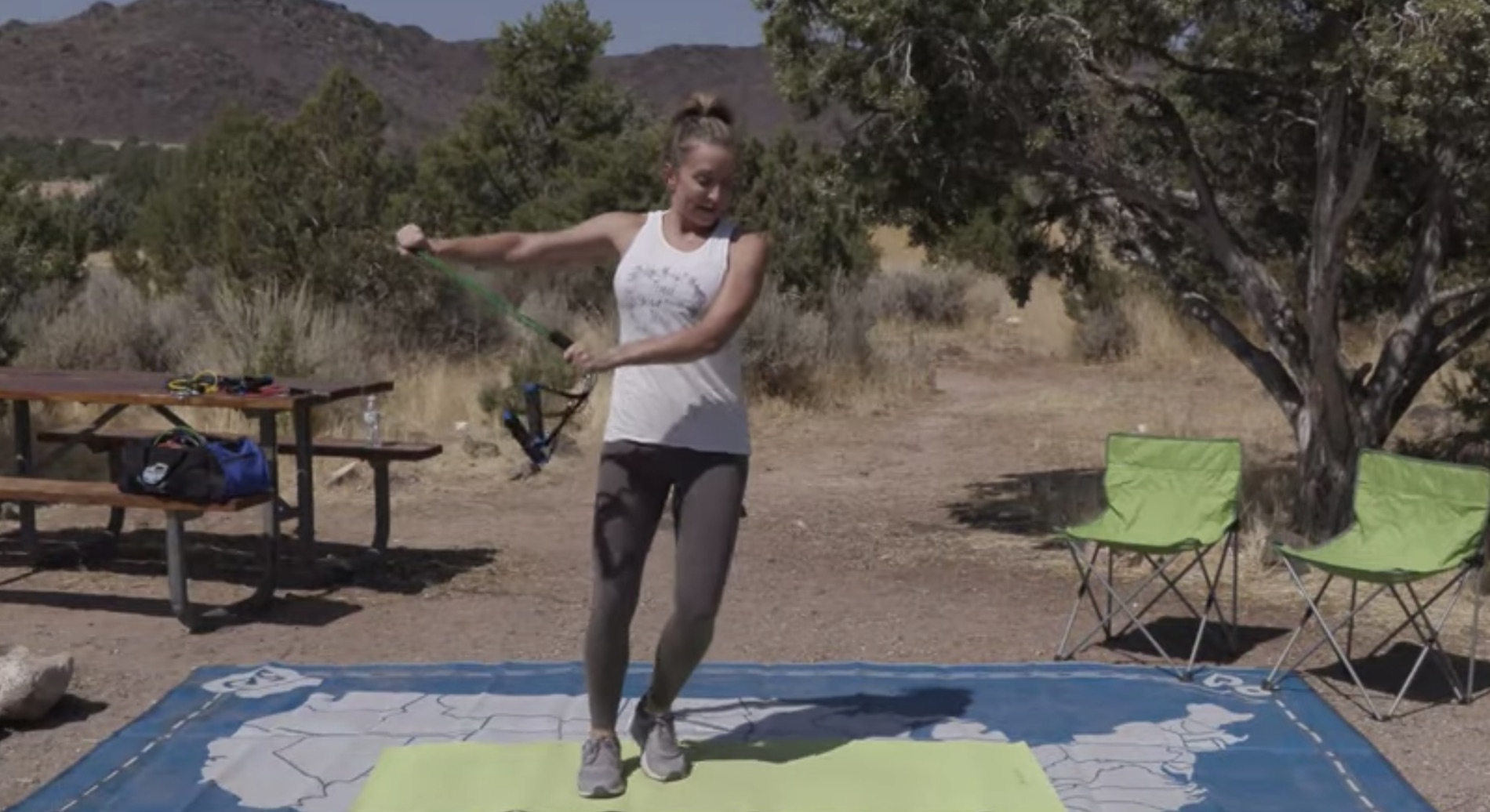