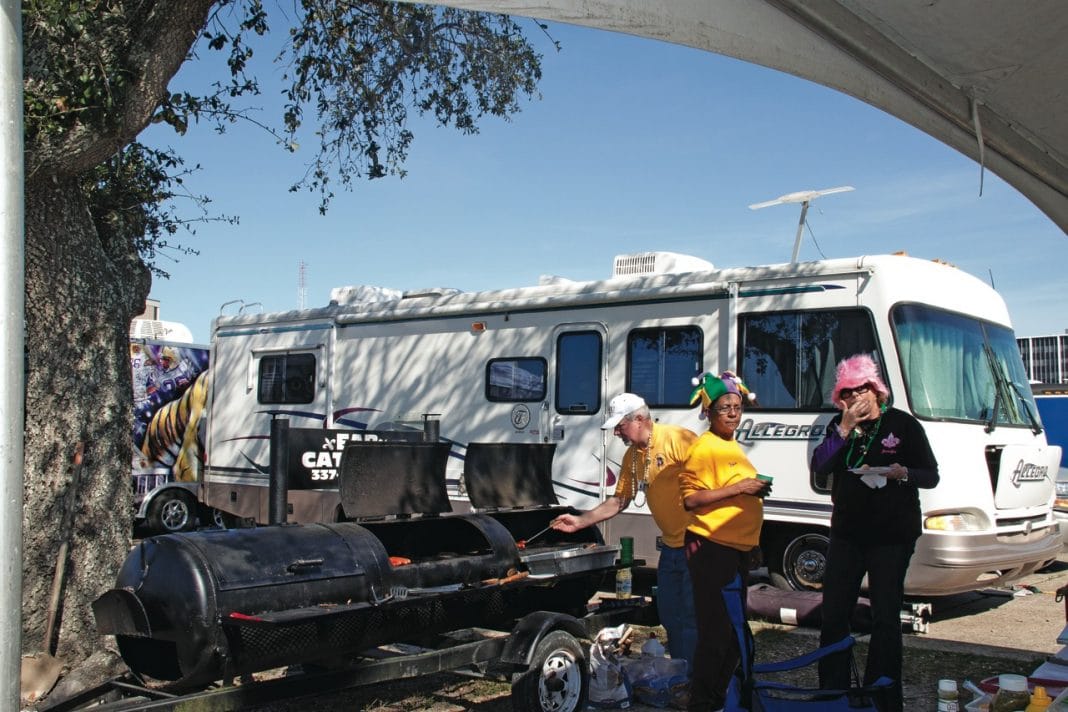 Many RVers head to Lake Charles in Southwest Louisiana for the gaming. After all, this community of more than 70,000 boasts three casinos. Others come to cruise the scenic 180-mile-long Creole Nature Trail, a designated All-American Road that leads travelers through prairies and bayou country and skirts the Gulf of Mexico. However, if you go during Mardi Gras season, you can have all that and one of the largest, most colorful and family-friendly Mardi Gras celebrations in the country.

“Throw me something, mister!” is frequently heard as crowds line the streets in downtown Lake Charles to catch shiny beads, doubloons, souvenir cups and other treasures tossed from floats blasting out foot-stomping music. The party officially gets started with the nighttime Merchants’ Parade, one of seven parades held during the city’s weeklong Mardi Gras celebration.

While there are plenty of RV parks, casinos and state parks where you can park your motorhome, those who want to be right in the middle of the Mardi Gras action pull their motorhomes into the parking lot of the Civic Center for a bird’s-eye view of parade preparations. It’s also just a quick stroll to the carnival rides and games next door. The Civic Center allows RVers to park for free and, while there’s no electricity or water, generators do the trick and portable toilets are readily available. For several days, a vibrant RV community springs up with old and new friends alike firing up barbecues and sharing big pots of Cajun gumbo, jambalaya, grilled local fish and sausage.

Barbecuing is a big part of the impromptu RV community that springs up at the Lake Charles Civic Center.

After parking our motorhome, we met area locals who’d driven their RVs from surrounding towns and states such as Texas and Mississippi, as well as snowbirds from as far away as Minnesota and QuÃ©bec. All of them are enjoying the Louisiana motto, “we all here together,” spending hours in the comfort of camp chairs swapping stories, sharing food and drink, watching the festivities, and getting into the Mardi Gras spirit of “laissez les bon temps rouler” (let the good times roll).

We stroll the street where the more than 60 floats are getting ready to move out. I’d always wanted to ride in a Mardi Gras parade and try my hand at bead throwing. I’d arranged with the Southwest Louisiana Convention and Visitors Bureau to hop a ride on its entry, a 40-foot alligator complete with Gator Gumbeaux, an energetic young man in a green alligator costume who’s become a Louisiana symbol.

You can’t visit Lake Charles without being inundated by Cajun culture, including flavorful food, fast-paced dance music and down-home friendliness. The Cajuns, also known as Acadians, are descendants of French Canadians who came from Canada and settled in the state’s prairies and watery bayous and marshlands. The French influence is evident everywhere, from French phrases and names of landmarks and businesses to Mardi Gras celebrations.

Mardi Gras, the festive season between Jan. 12 and Easter, is believed to have been brought to America by French trappers, but its origins are ancient. Most historians believe many Mardi Gras traditions can be traced to the early Roman celebration of Lupercalia, a circus-like revelry honoring Lupercus, the god of fertility and agriculture. When the French came to the New World, they brought their Mardi Gras traditions along with them. Today, Mardi Gras is a huge party before the fasting season of Lent.

We scramble up a steep ladder onto the alligator float. Along the walls are large hooks hung with strands of sparkly beads in purple, green, red, gold, silver, blue and pink. There are also bags of coins, or doubloons, and plastic cups emblazoned with “Happy Mardi Gras” and “Let the good times roll.” This is our “ammunition” – the goodies we’ll toss to the crowds.

The Southwest Louisiana Convention and Visitors Bureau’s alligator float is ready to launch in the Merchants’ Parade.

“There’s a technique to the toss,” said Monte Hurby, a local volunteer and lifelong resident of Lake Charles. “You don’t want to throw too close to the float or people jump into the street and it’s dangerous. The best way is to catch someone’s eye and try to toss right to them. And toss it high enough because the game is to catch it.”

Hurby is wearing a selection of his own favorite beads from previous Mardi Gras celebrations. When I admire a colorful strand that’s decorated with lifelike plastic alligator heads, he immediately takes it off and puts it around my neck. “That’s for you,” he said with a generosity we encounter over and over.

Dozens of floats line up in front and behind us. Some are decorated like pirate ships or circus acts. All pump out Cajun music from giant speakers and the air pulses with the competing strains and beats.

Shiny convertibles carry the Mardi Gras court – young girls, some only 5 or 6 years old, others teenagers – who wear big smiles for the crowds and even bigger tiaras and crowns that wink in the sunlight. It’s an honor to be chosen for the Royal Court and, throughout the coming year, these young women will represent Lake Charles at Mardi Gras celebrations in other states and at local and regional fairs and festivals like the crawfish and rice festivals.

Suddenly, we’re moving. We pass our new friends from the Civic Center’s impromptu RV park. They’ve gathered their camp chairs under shady trees. They wave and we toss them beads. Joe, a full-timer originally from Maine, catches one of my first tosses and flashes me a thumbs up. Hey, this is fun.

We pull onto the main thoroughfare and into the throngs lining both sides of the street. “Toss me something,” they shout, waving their arms, swaying to the pulsing music. Black, white, young, old, everybody wants beads. Some carry big umbrellas upside down and encourage us to toss goodies into them. Others, especially young boys, leap athletically into the air to snag treasures. Still others take a more sedate approach, sitting in chairs and waiting for the occasional string of beads to fly by. Several seniors use their canes to scoop up colorful strands that land on the ground nearby.

We toss beads and our other goodies out to the cheering crowd as quickly as we can. No matter how many we toss, the crowd waves and shouts, encouraging us to throw more. By the time we reach the end of the parade, many in the crowd are weighted down with thick collars of beads. Still they shout, dance and leap for more.

Between parades, we visit the Mardi Gras Museum, an impressive collection of costumes from past celebrations. Each year, more than 60 area krewes, or clubs, choose a theme and construct elaborate costumes. Some may choose an old-

Hollywood theme celebrating film stars of the past. Others might select a pirate or music theme. One year, a krewe chose “White Knights” and their costumes – all white satin, white feathers and shiny silver sequins – occupy a special corner in the museum. Complicated costumes are often designed and constructed by professionals and can cost as much as $10,000 each. Some incorporate “mantels,” 10- to 15-foot-high pieces weighing as much as 60 pounds that are worn on the shoulders.

One evening, we join the crowds at the Royal Gala, a celebration held in the Civic Center auditorium that allows the public (for the bargain price of $5) to watch the krewes strut in their costumes as they pay homage to the Mardi Gras queens and princesses. It’s a festive affair, with many groups reserving private tables and bringing in plenty of food and drink. The gala starts with the Krewe of the 12th Night in glittery red, yellow and green jester costumes dancing and twirling umbrellas. As they pass the Royal Court, each member bows or curtsies politely.

The groups also elect their own king and queen or duchess and duke and they’re appropriately attired with crowns and elaborate capes with long trains befitting their royal stations.

During the show, the krewes parade and dance, thoroughly entertaining the cheering crowd. There’s a couple in Fred and Wilma Flintstone costumes. Another krewe has opted for a western-wear theme. There’s a krewe whose costumes are all red, white and blue stars and stripes, celebrating our armed forces. The Krewe of Illusions, whose theme is fairy tales, sport colorful feathered costumes with giant mantles, including Jack and the Beanstalk, Snow White and Robin Hood. By the time the final krewes parade by, we’re thoroughly dazzled.

On Fat Tuesday, the final day of Mardi Gras, we join some of our new friends in their tent along the parade route for some food and fun. A hot zydeco band churns out dance music and band member Harold Guillory gives us a zydeco dance lesson. (Zydeco is a blend of rhythm and blues and Afro-Caribbean sounds.)

“Dancing the zydeco is like making gumbo,” Guillory told us. “It’s water, seasoning, meat and roux. So it’s water (step out one foot left), seasoning (step back in), meat (step to the back with the opposite leg) and roux (bring it back).”

He demonstrates the basic side-back steps and we stumble along trying to follow. Then he throws in some flourish. “Everybody makes gumbo differently,” he said, as he smiles, twirls, shakes his hips and moves to the side. “So you can add your own style to the basic ingredients.”

Men, women, kids, old and young – everybody dances to the infectious beat until we’re light-headed and dripping with sweat. We’re relieved when police sirens announce the start of the Krewe of Krewes parade and we hustle out to join the crowd. As the floats cruise by, they throw out beads, moon pies, Frisbees, coins and cups. Soon we’re leaping and shouting, “Throw me something, mister!”